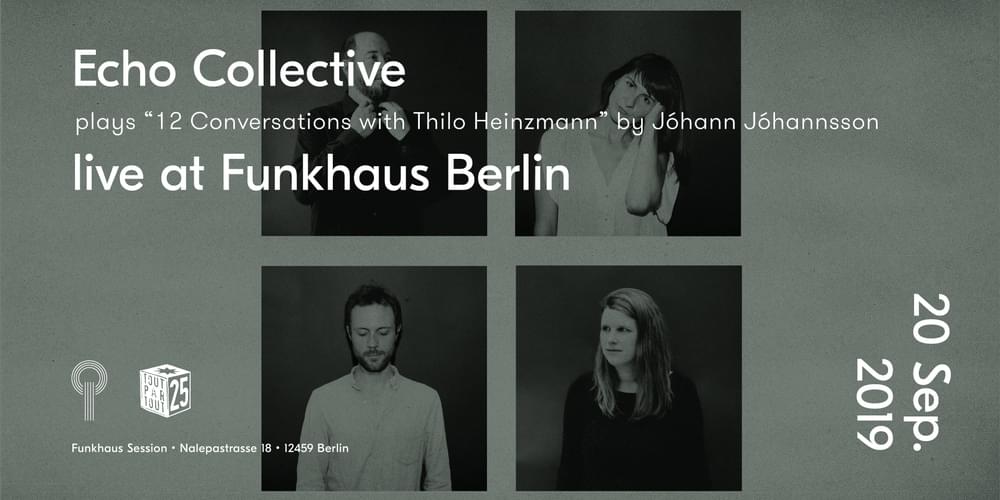 Details
Friday 20.09.19
Entrance: 18:30 Uhr, Start: 20:30 Uhr
Saal 1 | Funkhaus Berlin, Nalepastrasse 18 , 12459 Berlin
This event is operated cashless: Connect your bank account or credit card to use your ticket as mean of payment at the venue. Click here for more info

Album set for release on 20 September 2019,
a day after the composer would have turned 50

Jóhann Jóhannsson’s sudden and untimely death in February 2018 put an end to his unique practice of bringing different art forms together. The Icelandic composer was known for his inventiveness in allowing music and literature, music and theatre, music and film to communicate with one another in his works, and for combining classical and electronic elements with original, profound and often melancholic results.

British philanthropist and art collector Richard Thomas was fascinated by this process of breaking down artistic boundaries. He came up with the idea of commissioning a work that would establish a dialogue between music and the visual arts, with neither form overpowering the other, and in which the production and interpretation aspects of each would blend together to create a single entity. Thomas already had an artist in mind for his project – Berlin-based painter Thilo Heinzmann. He in turn thought instantly of Jóhann Jóhannsson.

Thomas’s original inspiration had something of an ulterior motive – his conviction in the ideals of the European Union. Now he had an Icelandic composer based in Denmark working with a German painter on an idea originated by a British music-lover, a project which would later also involve the Brussels-based musicians of Echo Collective – all in all a reflection of the cultural unity which, for many, is central to the EU.

Over a period of four years, Heinzmann and Jóhannsson met up from time to time and engaged in a series of in-depth conversations about art, politics and their own lives. Working to, or rather with, a painting by Heinzmann, Jóhannsson composed a new work for string quartet, 12 Conversations with Thilo Heinzmann, which will be released by Deutsche Grammophon on 20 September, the day after what would have been his 50th birthday.

Commissioned by the Richard Thomas Foundation, 12 Conversations is both exceptional in and typical of the composer’s output. The Golden-Globe-winning Jóhannsson, who was born in Reykjavík in 1969, established connections not only between music and other artforms – almost standard practice among Icelandic artists of his generation – but also between different musical genres and eras. A brilliant auto-didact, who learned the trombone and the piano, and studied languages and literature at university before cutting loose to immerse himself in Iceland’s hugely varied and often raucous indie rock scene, he was constantly aware of the interplay between genres, between all times and sounds.

One of Heinzmann’s paintings adorned Jóhannsson’s studio wall as he worked on 12 Conversations, a score of absolute purity, written just for string quartet and entirely devoid of electronic elements. It is, in a way, a pattern book of his musical craftsmanship, which – in the light of his early death and the realisation of what he might yet have been capable of writing – gives serious pause for thought.

The work’s dozen movements amount to a creative union of Jóhann Jóhannsson’s personal expression and the influences that shaped his musical language. These conversations involve a dialogue not only with Thilo Heinzmann’s art but also with the spirit of musical Minimalism past and present. Echoes of simple Baroque ground-basses and sustained affects range across the composition’s expressive universe, at times used to build hypnotic states of high tension, at others to open a still space for inner reflection. There’s room, too, for laments and elegies – reminders of our mortality – and for melancholy dances. After exploring the infinite possibilities of tonal textures and sound colours in so many of his works, Jóhannsson creates a new expressive world in 12 Conversations. The string quartet’s intimacy and the direct, heartfelt emotions of simple melody, stripped bare of electronic or digital clothing, set this album apart from his earlier releases.

12 Conversations seems tailor-made for the Echo Collective players heard on this recording – violinists Margaret Hermant and Sophie Bayet, viola-player Neil Leiter and cellist Thomas Engelen. The musicians of this ensemble have made a name for themselves as genre-defying pioneers, dismissive of any barriers between classical and diverse musical genres. They have worked with contemporary artists such as Dutch pianist Joep Beving and A Winged Victory for the Sullen.

Jóhann Jóhannsson worked with them for three years on an earlier work, Orphée, and came to admire them greatly because, he said, they understood that apparently simple music is not to be taken lightly, that its dynamics and expressive aspects require absolutely precise calibration. Shortly before his death, he invited them to help him realise a definitive edition of 12 Conversations. In the event, they were tragically deprived of the opportunity of discussing the finer points of the score with him, instead basing their interpretative decisions on the conversations they had managed to have with him about the work.

Premiered in London in 2016, 12 Conversations with Thilo Heinzmann as now recorded by Echo Collective, forms part of Deutsche Grammophon’s ongoing celebration of Jóhannsson’s life and work. The Yellow Label’s tribute began with the release of Retrospective I, the first of a two-part edition comprising his most significant compositions. Retrospective II and a number of previously unrecorded works and unissued recordings are set to follow at a later date.

Echo Collective will be performing 12 Conversations with Thilo Heinzmann live on tour this autumn, with concerts in Germany, Belgium, the UK and elsewhere (a summary can be found here).