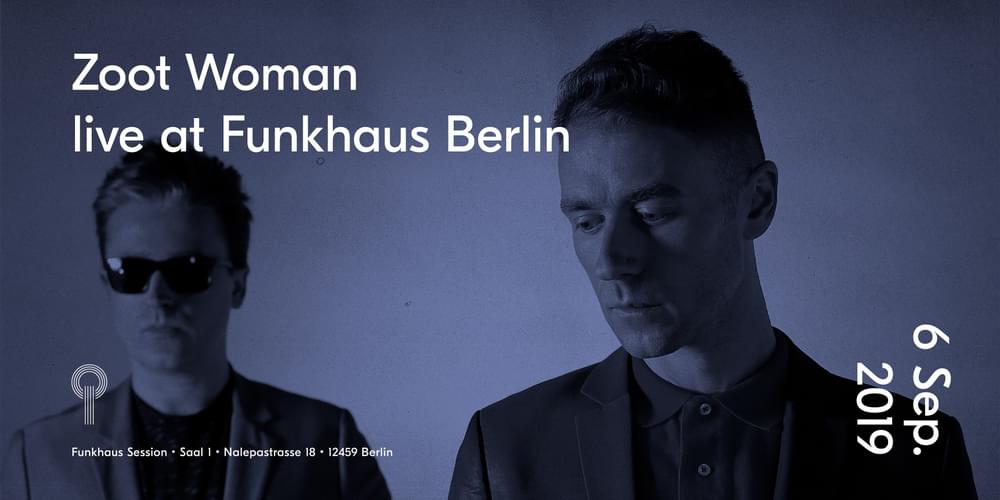 Details
Friday 06.09.19
Entrance: 18:30 Uhr, Start: 20:30 Uhr
Saal 1 | Funkhaus Berlin, Nalepastrasse 18 , 12459 Berlin
This event is operated cashless: Connect your bank account or credit card to use your ticket as mean of payment at the venue. Click here for more info

At the end of 2017, following a triumphant year and hot on the heels
of ‘Absence’, Zoot Woman announced plans for the production of
'Redesigned'.

Fifteen tracks in total, three from each of the five albums released to
date; ‘Living in A Magazine’, ‘Zoot Woman’, ‘Things Are What They
Used to Be’, ‘Star Climbing’ & ‘Absence’.

‘Redesigned’ showcases Zoot Woman in an unexpected new light,
the result being an extreme departure from their well known electronic
sound.

In the seventeen years since their game-changing debut, Zoot Woman
have developed and reinvented their material, gaining fans the world
over, proving themselves to be a diverse act both in the studio and on
stage.

Now they return with an album more culturally relevant than
ever.

Described as ‘the mother of all Zoot Woman albums’, ‘Redesigned’
features exposed, organic recordings of many favourites, such as
‘Grey Day’, ‘Holiday Home’ and ‘Information First’, all of which
demonstrate both musical and lyrical quality.
With so few groups these days having the chance to build an extensive
back catalogue, it’s rare to see one with a discography that stands up
in its barest form.

‘Redesigned’ is sure to delight the true Zoot Woman fan.

Your cart is reserved for MINUTES Place order now
Cookies help us deliver our services. By using our services, you agree to our use of cookies. Learn more